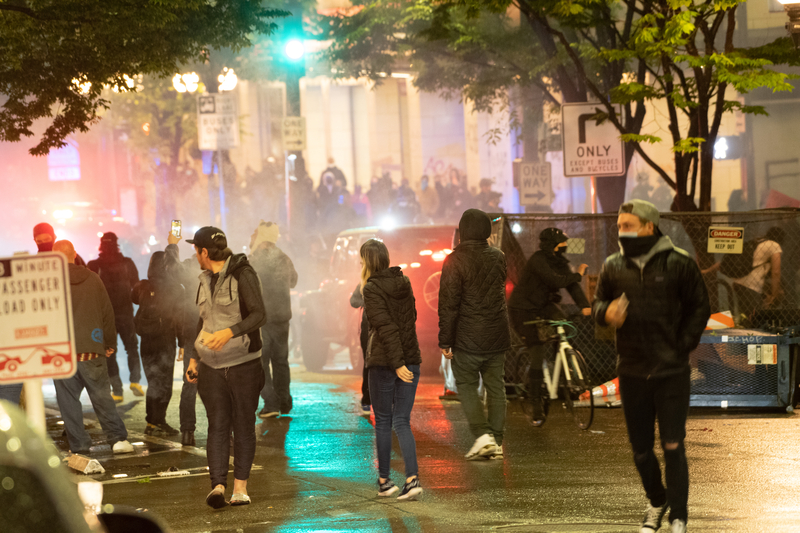 In light of current events, we thought it might be a good time to discuss some basic safety tips for riots. This is not necessarily for long-term survival during civil unrest, but you can read about that here.

This is basic advice for staying safe if you find yourself caught up in a violent protest or full-on riot. Even protests with the noblest intentions can snowball into something dangerous, and given this seems to be a growing trend in major American cities this year, it’s important to think about what you would do if you got caught in the wrong protest at the wrong time.

Probably the #1 tip is to lay low, keep your head down, and don’t stand out. You don’t want to attract the attention of the police or of the rioters, as either can quickly turn violent if you are going against the grain. Don’t try to stop looters, but don’t join them, don’t try to reason with or defend the cops, but obey their orders and try to get behind them and away from the hottest areas as quickly as possible. If you find yourself right in the middle of the action, try to stick to the edges of the crowd as much as you can.

If you are worried there might be a riot, avoid the areas that will most likely to erupt into violence or looting. These are usually commercial areas, downtown or civic center areas, wherever a protest is likely to happen.

This year, many riots have begun in the wake of police shootings, so, at least currently, if you hear of a high-profile police shooting in your area, stay at home. Other reasons riots can erupt are any kind of political protest in general, a local sports team winning a championship, or on occasion, a labor strike.

While you are in the thick of the action or nearby, a good way to keep up with what’s going on in this day and age is social media. Twitter and Facebook updates can keep you informed both of the protestor’s plans, as well as local news updates and updates from local police departments who might have instructions for residents in the area.

This echoes #1 a but it’s worth its own mention. If you find yourself in the middle of a violent protest or full-on riot, don’t run, don’t get involved, just be calm and walk. Whether that means walking with the general movement of people or slowly away from the action without drawing attention to yourself, just be confident, discreet and move slowly and steadily towards safety.

Let Us Know What You Think...
5 Safety Tips for Riots was last modified: November 19th, 2020 by Samuel

The Amazing Benefits of Raw Honey