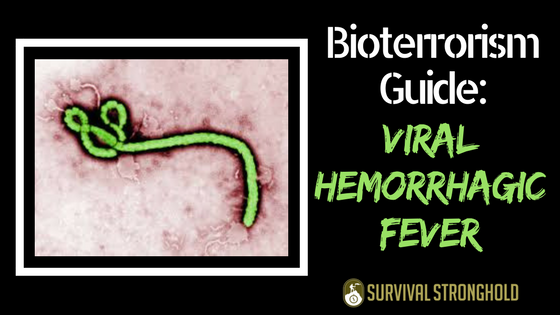 While most of the known outbreaks of viral hemorrhagic fevers, such as Ebola and Hantavirus, have seemingly happened organically, they could be incredibly dangerous if weaponized.

Typically communicated zoonotically, or from humans to animals, viral hemorrhagic fevers have high mortality rates and are highly contagious.

One of the factors that is worrisome about viral hemorrhagic fevers and bioterrorism is that it is highly communicable and could easily cause great devastation in a short period of time, as we saw in West Africa in 2014.

However, the feat it would take to actually develop a weaponized hemorrhagic fever is great. During the 2014 crisis, many security experts, in the US and abroad, considered the issue of whether or not ebola could be weaponized by a rogue terror group. The ultimately concluded that, because of the equipment required and the nature of the viruses, the terrorists would most likely cause their own death before they could release the virus on the public.

Viral hemorrhagic fevers first display symptoms similar to the flu, which progress into internal bleeding and bleeding under the skin. Advanced stage hemorrhagic fevers include such complications as shock, seizures, nervous system malfunction, and coma.

There is no known cure for many viral hemorrhagic fevers. Avoiding contraction is the most important measure of prevention. Since it can be communicated from animals, it is important to control insects and vermin in an affected area.

If viral hemorrhagic fevers were to be weaponized, the results would be catastrophic.

In order to successfully, and safely, weaponize a viral hemorrhagic fever, it would require a very well-equipped laboratory as well as the necessary safety equipment, and more. It is more likely that an established state effort would weaponize these viruses.

During the Cold War, the USSR was able to grow large amounts of the Ebola and other hemorrhagic fever microbes in a lab, along with smallpox, anthrax, tularemia, botulism, and others. It is unclear how, or even if, they ever deployed these weaponized microbes, but it stands as very grievous evidence that a state could develop such weaponized viruses.

Today, we have enemy countries across the globe who might be willing to put such effort into developing such terror weapons, so it is not outside of the realm of possibility.