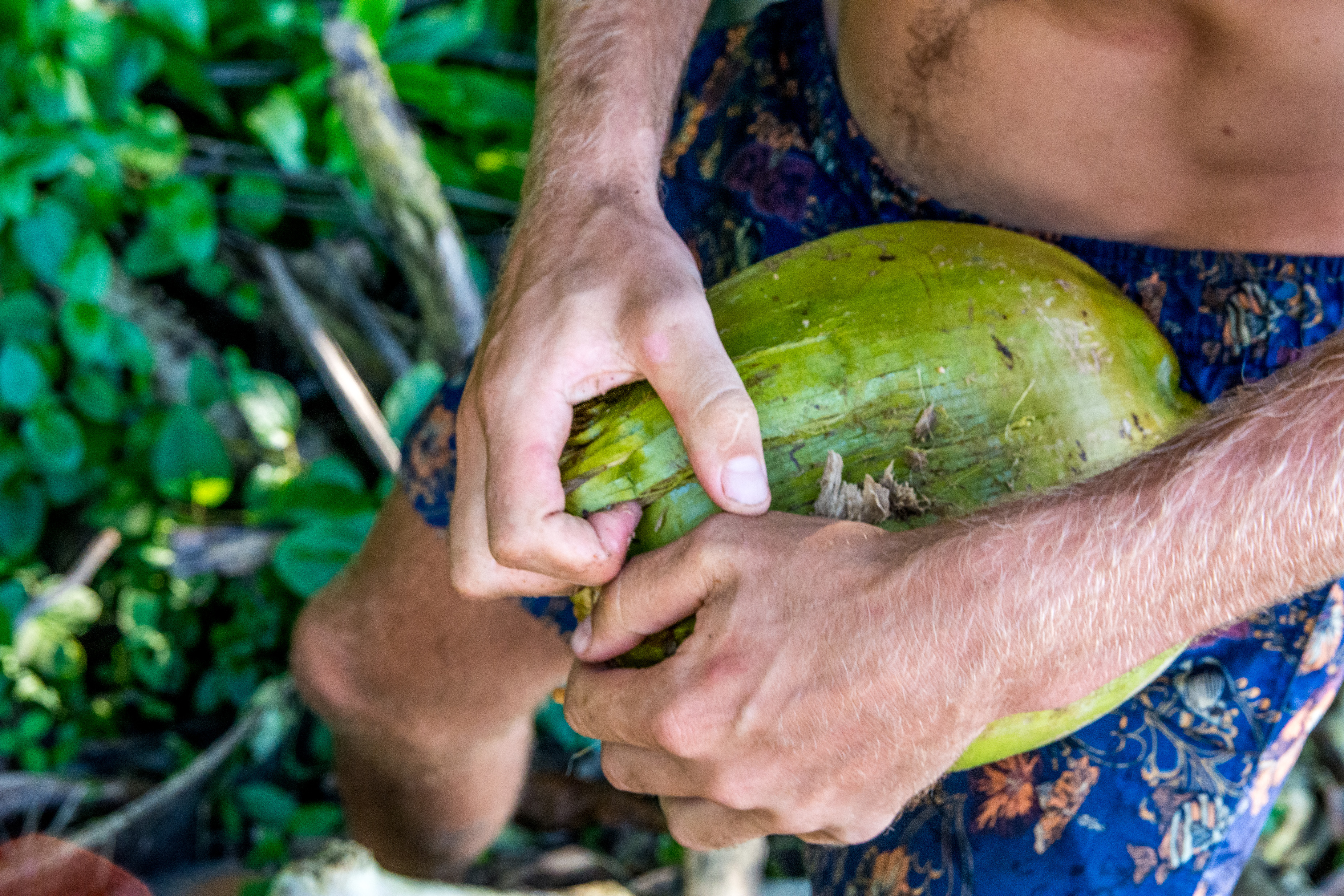 The main advantages to survival in the tropics are warmer weather, higher availability of water, and higher availability of food.  But simply because water and food are available doesn’t necessarily mean that you will be able to access them.  Having the right equipment helps, but having the knowledge of what to look for and how to use it is even more important.  One of the best sources of both food and water in the tropics are coconuts, but getting to those life-giving resources isn’t easy if you don’t know how.

What to Look For

Not all coconuts offer the same resources, but they do all have something that you can use.  The most important are the those that can offer you fresh coconut water to drink.  These coconuts are younger, green in color, and rounder in shape.  They do have some flesh that can be eaten, but not very much.  If you are in need of food you will want to get larger, brown, oval-shaped coconuts that have thick oily flesh inside.  But no matter what the color or shape of the coconut is, don’t waste time or energy on trying to open a coconut that has a black stem connection, or a crack that leaks water, these coconuts are only going to be rotten on the inside.

Opening with a Knife

If you have a knife, or better yet a machete, things are going to be easy.  If you are opening a green coconut for water then you want to direct all your attention to the end where the stem was connected to the tree.  If you have a knife, carefully stab the knife into the top on one side of the stem connection, remove the knife and repeat this on the other edges until your cuts have connected.  Then remove the material between the cuts.  You may still need to make a small hole to puncture the nut inside.  If you are trying to open a brown coconut for food you will need to remove the outer husk first.  This can be done by stabbing the coconut with the blade aligned with the oval shape, then using leverage and not a sawing motion, work the knife up and down the coconut until you have a cut that runs the entire length.  Do this on the other side and separate the two.  Then strike the nut dead center with the blade, and rotate while repeatedly striking dead center.  After making it around the nut a few times strike it against a rock and it should open in two halves.

Opening without a Knife

Young coconuts can be stabbed with a sharp stick at the stem connector to access water.  If you don’t even have a sharp stick you can strike the flatter sides of the coconut against a tree, this will split the coconut but it will do so in a way that makes it more difficult to retain the water.  To open a brown coconut without a tool hold it at the ends and strike a flat side against a sharp immobile stone until you have pierced the husk, then apply pressure at a sharp angle to peel the husk off with leverage.  Once you have the nut, strike it against the same stone, rotate and repeat until it opens.

Survival in the tropics might not be as easy as Gilligan made it look, but it is certainly made easier if you can access the resources in a coconut.

If you want to see how polynesian people open coconuts, Click Here

Three Ways to Stay Warm in the Wilderness...