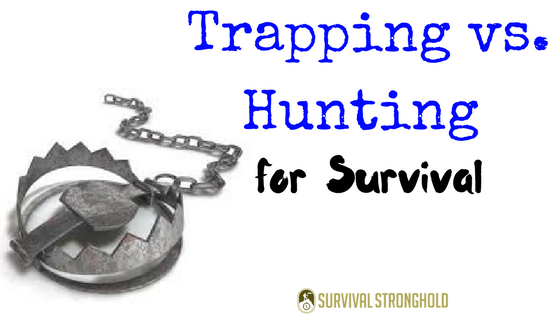 When you are in the position of needing to find, kill, and dress the meat for your next meal, the finer points of how you acquire this meat can make all the difference in the world.

There are several different ways of catching and killing meat that have all been practiced in some form, across the world, since the beginning of our species. And they all have their pros and cons.

The survivalist knows that it is always prudent to know a bit about these different methods of trapping and hunting animals, and it is certainly better to be prepared for a variety of different meat hunting techniques than to focus only on one and find yourself in a position where that will be ineffective.

You certainly don’t have to, and shouldn’t, chose between hunting and trapping, but rather, you should understand the differences between the two and when it is best to use each. In an ideal situation, you’ll be able to use both together. Here is a brief overview of each, and when to focus your efforts on one or the other.

Trapping is, simply put, the practice of setting traps and snares of various kinds out for your food, most often smaller game, and either waiting or coming back to check the traps to collect anything you might have caught, and then killing it.

This has many advantages, in that you can set several traps and, in theory, go off to hunt something else. Trapping is also ideal if you do not have a lot of energy, resources to hunt larger game, or are injured (although it will still involve walking a bit if you want to spread out your efforts).

The downside is, of course, that you can put a lot of time and effort into something that doesn’t produce anything, if all your traps fail, and it might take awhile to find this out. You will also catch a lot of smaller game, meaning you’ll have to do it more frequently, although anywhere with boars, if you’ve got the skills and supplies to build a pig trap, that would definitely feed a small army.

Trapping is a great option for your initial efforts to get food, and as a supplemental source of sustenance to any other efforts, like hunting and gathering edible plants.

Hunting differs from trapping (although technically trapping could certainly be considered a type of hunting) in that you actively seek out your prey and kill it where you find it. This might involve waiting at a food source or watering hole, following its tracks, setting out some bait out in an open place and letting the aminals come to you, or simply roaming around looking for it. The former is great to do in between any other mission, such as going around setting traps, or on the move looking for water or foraging for other sources of food.

Hunting can take a bit of energy, depending on what you’re hunting. The most common advantage over trapping is that you’re  more likely going to be hunting bigger game as opposed to trapping it, but you can of course hunt all the small game that trapping would get you.

If you are in fact hunting larger animals, you will have to dress it, carry it back to camp, and process it, so this can also be a big downside, which is why setting traps when you’re still getting established in a given area is better to do first, then saving hunting for when you have a well set up camp to return to.

This brings me to my final point, which is that the best approach is always to do the most you can, using your resources in the most intelligent way you can think up. Only do what you’re prepared for and ready to do, that has the highest likelihood of fruitful results.

8 Unexpected Survival Items You Should Stock Up...