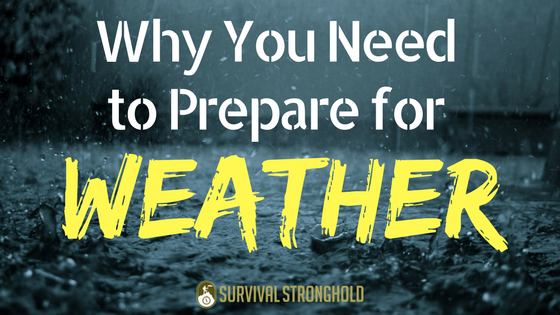 If you are going to prep for any disaster, it should be weather related. This is the #1 most pertinent kind of survival prep, because it is the least predictable. The possibility of war may come and go, terrorist attacks are growing more likely every day but still aren’t widespread, martial law is practically just a conspiracy theory, and you’re sure to see

The possibility of war may come and go, terrorist attacks are growing more likely every day but still aren’t widespread, martial law is practically just a conspiracy theory, and you’re sure to see an economic meltdown coming before it hits.

The weather, however, can lash out at any time, and it’s not ever possible for humans to control it, and we tend to feel the least threatened by it, as opposed to human threats.

Take Hurricane Sandy, for example. New York City was largely damaged as a result of this “Super Storm” because it’s infrastructure was not updated enough to deal with such large storm surges.

In the city and surrounding areas, the majority of the devastation was caused by a lack of preparedness, rather than the severity of the storm. Most people only equip themselves with enough food and supply for 72 hours, if at all, these days.

In reality, you need to be prepared for 10-14 days without power, food, or basic supplies. In recent history, we have seen so many issues with disaster relief organizations being unable to supply populations with the basic supplies they need for weeks on end. If you are only preparing for a few days, you will inevitably have to rely on these organizations, and you never do know when they will fail to provide you and your family with what you need.

We have several articles on preparing for specific weather situations that will serve as a great starting off point to help you get more prepared for weather disasters:

Sheltering Indoors In A Thunderstorm

Common Natural Disasters and What You Need for Each

How to Seal Your Home Against Bioterrorism and...

10 Ways to Use Duct Tape for Survival