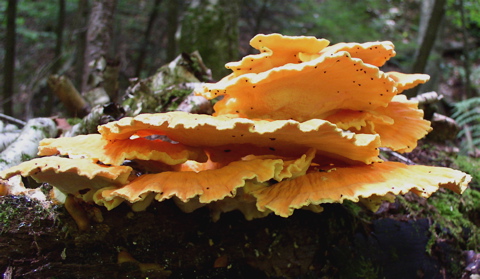 It would always be nice to come across a live chicken in a wilderness survival situation, but the next best thing is “chicken of the woods”.  Not a chicken at all, it’s a mushroom, several species of mushrooms really, from the genus Laetiporus.  They are commonly sought after edible mushrooms not only for their taste, but because they are not easily confused with poisonous mushrooms as some edible verities are.

If you notice chicken of the woods while you are hiking, take note of where you saw it, it is likely to be there next year at the same time and may even be larger.