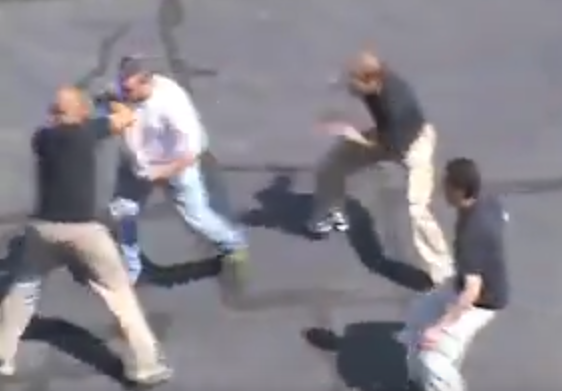 As I have said before, the people who commit violent crimes are not looking for a sporting fight, they are looking for victims and they will not abide by any rules or decency.  One common, and difficult to defend against strategy employed by violent criminals is to outnumber their victims.  This can, and has for many, turned into a deadly situation.  But even in a situation where you are facing multiple attackers there are still steps you can take to increase your odds of survival.

The best thing that you can do if you are being confronted by multiple potential attackers is to take a defendable position.  Put yourself on one end of the group, not in the center.  If you can’t run then you want your back to the wall.  These steps will greatly reduce the threat of multiple attackers by reducing the angles they can use to attack you, and allowing you to defend only from the front.

If you have taken a defendable position and clinched one attacker, things are looking up for you.  But since real life isn’t an action movie the rest of your attackers aren’t going to be waiting their turn.  You will need to move and engage another attacker.

Even if you are able to get a good starting position, and counter attack while defending from the clinch, and move to fight one opponent at a time, you are not Jackie Chan (if you are I love your movies), and you are not going to be able to knock out all of your opponents one at a time.  You will need to fight for an opportunity to escape the area completely, find a weapon of opportunity, or extend the encounter long enough that you can get help.

Fighting is always a dangerous proposition, fighting multiple attackers is a life-threatening scenario.  But even if you are attacked by multiple assailants there are still steps you can take to make it out alive.

Considerations for a Survival Knife

Is Prepping for Survival Worth Your Time?