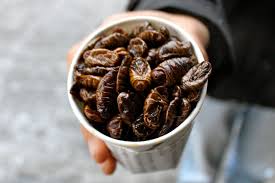 Most people might think of squirrels or birds when they think of small game in a survival situation.  But you might have to think a lot smaller than that in some cases.  If you have no weapon, and if your situation doesn’t allow for you to spend time manufacturing one or setting traps, then perhaps it’s time to add bugs to the menu.  But what bugs, and how should you go about catching them and eating them.  These are a few ideas to get you started.

Earthworms are edible, maybe not appetizing, but edible non-the-less.  They are also some of the easiest bugs to find.  Just dig in some dark damp soil or turn over a rotten log or flat stone.  While you could eat them raw if you had to, it would be safer and more palatable if you roasted them first.

For those that don’t know, grubs are fat, white, caterpillar looking larva of beetles.  They are commonly eaten in some areas of the world and should not be passed up if in need.  Break apart rotten logs or dig underneath them.  Like earthworms, if you didn’t have the option you could eat them raw to avoid starving, but if you can, roast them until they are browned.

Pillbugs are also called woodlice or sow bugs.  They also can be found in and around rotten wood and leaves, usually in good numbers.  They are slow-moving, and probably one of the tastier options.  While other bugs are better roasted, pill bugs should be boiled when possible since they can carry nematodes.

While ants are small, they are often available in abundance.  Track their highway until it leads you to their hill, then grab a stick into it and wiggle it, remove it before they climb it and sting or bite you, and shake it in a container of water to get them off and store them.  Boil them in the water before eating them.

Grasshoppers, and crickets, are edible and consumed regularly in some countries.  Even though most people might find them more appealing than the aforementioned bugs, I put them last on the list because they are the hardest to catch.  Try tying a shirt of other cloth between two ends of a “Y” shaped stick to use as a net.  If you do succeed in catching some, roast them to make them more palatable and to eliminate possible parasites.

Don’t limit yourself and your odds of survival by thinking too big when it comes to food.  Even large animals like grizzly bears get a sizable portion of their diet from bugs.  They are available in great numbers and easy to catch.  These little critters could be the difference between a full stomach and slow starvation.