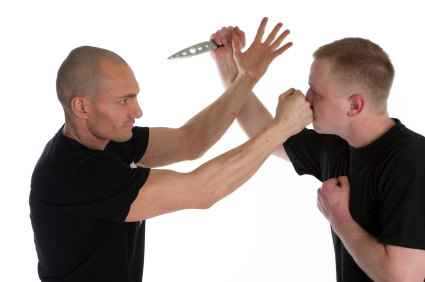 Despite what Tim Kaine thinks, guns weren’t responsible for the terrorist attack at Ohio State University yesterday.  In fact, a gun is what stopped that attack, luckily before any victims could be killed.  But with idiots like Tim Kaine running around creating “gun free” and target rich environments knowing how to defend yourself against a knife attack with “empty handed” skills is an important aspect of self-defense.

No amount of training is going to make fighting a knife-wielding attacker a safe prospect.  The best thing you can do from the start of the attack is to create distance between you and the attacker, preferably with a barrier.  The barrier doesn’t have to be a wall or a closed door, it can be a car, a trash can, or even a tree.

If creating distance has failed for any reason and you are face to face with a knife coming towards you, you need to deflect the knife away from your center line where it can do the most damage.

Given the likelihood of error in a high-stress situation like a knife attack, and the lethal potential of the knife, you are not going to be able to successfully deflect the attack for long before a stab or slash gets through.  Because of this, your next step needs to be dominating the knife.  Don’t let your attacker get their free hand between you and the knife.  Grab the knife hand, controlling the thumb.  Turn the blade toward your attacker and do whatever it takes to get and maintain control of the knife.

In order to get the knife from your attacker, you are going to have to give them something else to think about, like excruciating pain for one.  With both your hands fighting for control of the knife, if you do not know wrist locks and joint manipulation, then biting is the best bet at this point.  Bite their face, and bite it like a mad dog.

Once you have gotten control of the knife, keep it close to your body in your strong and with your weak hand out in front of you.  If your attacker comes forward you can grab them with your weak and to control them and stab upward, or slash downward with the knife.  But always keep the knife close to you so that they cannot take it back.

Attacks like yesterday’s can come out of nowhere.  Be prepared, physically, and emotionally to handle the situation and protect yourself.

Caring for Your Ax

9 Important Things to do When the Power...