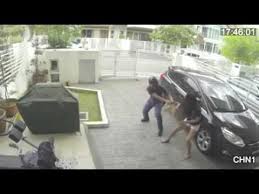 Self-defense is something that everyone needs to think about, but women are particularly vulnerable and often specifically targeted.  Women can be targeted for muggings because they have less strength, have a thinner skull (making them easier to knock unconscious), or as targets for abduction and sexual assault.  Because of hormonal, physical, and social differences, women tend to not think about fighting or violent confrontations as much as men, but if you want to avoid an assault or survive one, then you must think ahead.  Here are some basic principles to keep in mind.

Realize that you, as a woman, are at a great physical disadvantage when being attacked by a man.  If real life resembled movies where a knee to groin and a foot stomp ended an attack, then violent crime statistics would be greatly different.  The fact is your attacker might even have a weapon.  But while your attacker might be fine with trading blows with a woman he outweighs, it is doubtful he will be willing to trade shots with a woman even if he is also carrying a gun.

Many victims later report that they saw their attacker, and that they were nervous or afraid of their attacker but didn’t attempt to get away prior to the attack.  Don’t ignore any apprehension you feel about a person.  Turn around, go back inside, or run away.

If you are attacked, punching and kicking will not have much of an effect.  Instead of trying to hurt your attacker try to injure them.  Attack their eyes, gouge their eyes with your thumbs (thumbs are stronger than other fingers) as deep as you can.  The nose and throat are also soft targets, but the groin should be next of the list.  Instead of just hitting, or even squeezing, grab your attacker’s groin and drop your body weight, make quick and repeated jerks with your arm.  Severing your attackers vas deferens is not something they will be able to fight through.

If your attacker is trying to get you into a car or a building, nothing that happens in the car or building will be worse than what they will do to you outside.  To avoid being picked up and carried, drop your hips to the ground, get your feet as far from your attacker as you can, and go limp if you have to.  This will make lifting you extremely difficult.

Pretending that there are no threats is never going to protect you.  Planning, arming yourself, and training, are not symptoms of paranoia, they are the difference between a hard target and a statistic.