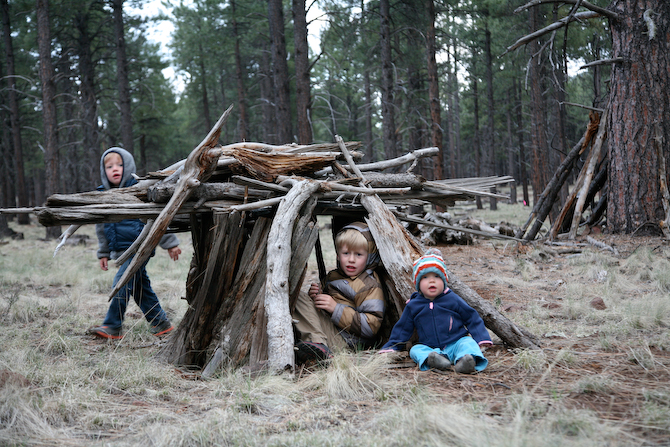 In a time when it is not unusual to see kids as young as two years old using a touchscreen device to entertain themselves while being pushed around in the shopping cart through the store, it should be obvious that most kids are disconnected from the real, natural world around them.

Children of this generation are less likely to take an interest in the outdoors, and less likely to gain the knowledge and skills necessary to survive in the wilderness.  Getting them started young can give them a greater appreciation for the natural world, start a foundation for future survival skills, and provide them with entertainment that is more hands-on than a touchscreen device or video game console.  These are just a few skills you can teach young kids that pertain to wilderness, or even urban, survival.

Even young kids can be taught that the sun rises in the East and sets in the West.  They can be taught “Never Eat Sour Watermelons” to learn the clockwise order of the cardinal directions, that if they can determine east and west, they can then determine all directions.  As they get older they can learn how to find the North star using the big dipper, and how to orientate themselves with landmarks and ultimately how to read a map.

Involving kids in the process of gathering materials necessary to start a fire, and in the actual ignition, as well as safety, can be exciting.  They can learn at an early age that materials need to be added starting small, and gradually increasing in size.  They should also be taught how to prevent a fire from spreading and how to safely interact with a fire they are building or maintaining.

Kids love to know the names of everything.  Teaching them how to identify poisonous plants, edible plants, and plants that can be used for everything from medicine to shelter will make the whole world around them more exciting and give them an interest in the wilderness that they wouldn’t have in all plants were mysterious.

If you don’t want an overweight teenager that would rather play Xbox than skin a deer, then start them off young so their interest and skills can grow with them.

3 Survival Hacks for When Tools Are Not...