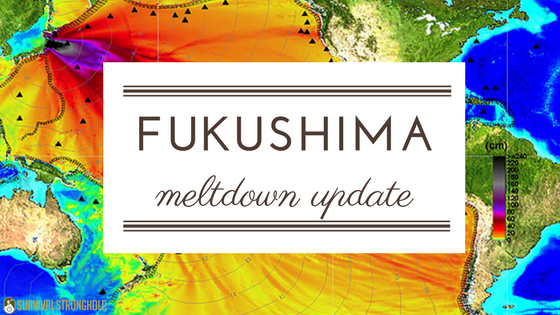 It’s always been hard to get an accurate picture of what’s really going on at the Fukushima Daichi nuclear plant in Japan since its cooling system was damaged and failed in the 2011 tsunami. The Japanese government is notoriously tight-lipped about the nuclear disaster, but time to time we hear updates on what we’ve all assumed was going on: a six years (and counting) nuclear disaster with no foreseeable positive outcome.

The technology simply doesn’t exist to properly contain the radiation leaking from that plant, and to this day, 300 tons of radiated water is still being dumped into the Pacific ocean.

This week, we got an update on the high levels of radiation found on the first level of the former nuclear power plant, and, in layman’s terms, it’s so lethal that even the robots they use to test the radiation levels are ending up fried within a few hours. Experts inform us that were a human to be exposed to that level of radiation, they’d die instantly.

There’s not a lot of potential of good news coming out of this environmental disaster. The best case scenario would be to (again in layman’s terms) dismantle the damaged reactors and basically keep the radioactive pollution at the level it is now. Worst case scenario? Another explosion that could contaminate a vast portion of the planet, if not the entire planet, with radioactive waste.

So what do we do with this information? Well, on a lot of levels, obviously there’s not much we can do. But keeping this disaster in the back of our minds will definitely give us a leg up to keep us prepared. It’s one of the many potential global catastrophic events we warn about, and quite possibly the most likely.

To be blunt, this is the kind of stuff worth investing some money in to prepare for. Some items you might want to research are potassium iodine tablets, or NBC suits for your family, which aren’t cheap.

This is the reason people had bunkers and fallout shelters during the cold war, so you might want to think about scoping out a cave or even investing in a proper shelter. If you live along the West Coast or in Hawaii or Alaska, you might want to consider relocating.

Of course, the basics of survival still apply. Get yourself a good supply of water, food, and a plan for your family were there to be a global nuclear disaster.

Let’s hope and pray that the nuclear disaster doesn’t get much worse, and that we don’t have to face a global disaster, and it’s always best to remain positive. Just keep your eyes on the news and keep it in mind.

Survival Skills You Need to Learn