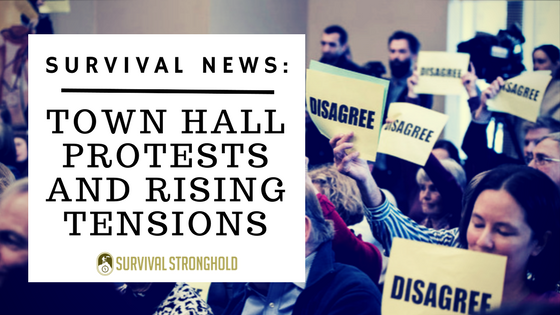 You may have heard of the many incidents of large, boisterous crowds full of chanting and protesters at many town hall events across the country recently.

The growing movement is credited with being the Democrat version of the Tea Party movement, as hundreds flock to their local Republican town hall meetings to make their voices heard.

They flood town hall meetings, armed with damning questions, chants, and signs, filling the facilities far beyond capacity and causing much disruption and chaos. Many lawmakers have even reported a very small number of their own constituents in the crowd.

The protesters grill the lawmakers about what they will do about immigration, healthcare reform, LGBTQ issues and more, signaling a widespread resistance across the country to the Republican control of the House, Senate, and Executive branch for the first time in decades.

There have been accusations from the right that the movement has been organized ultimately by notorious protest financier George Sorros, and there does seem to be a definite paper trail between the organizations putting together the town hall protests and his organizations.

But whether or not the movement really is a small, grassroots campaign to pressure lawmakers in the manner our representative democracy allows for, or a movement funded by foreign billionaires, one thing is clear: people are angry, they are vocal, and the massive divide that has ripped through our country for the last two years does not seem to be hosting any civil discussions and bipartisan spirit anytime soon.

What does this mean for preppers? Well, as I consistently warn, while tension over politics always ebb and flow, we currently have the most divided constituency in US history, and widely mobilized protest movements are capable of moving into war. We also see many cities across the country moving to ban funded protests, and any restriction on the right to freely assemble and speak is always a troublesome prospect.

I think what’s more important than ever right now is to not get caught up in the strife ourselves, and work on repairing the wounds caused by this election in our own communities. When you are preparing yourself for disaster or political upheaval or violence, don’t burn bridges between those around you who you need the most. Don’t get sucked into the hype and find yourself too involved when things get bad. Just keep your head down, focus on what your family needs to survive, and stay calm.

Is Prophecy Being Fulfilled Today?