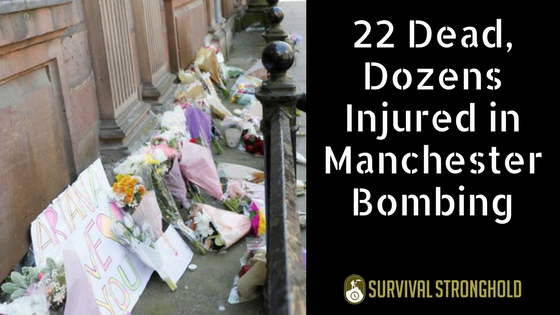 22 people have been killed and over 50 injured in a horrific terrorist attack following a concert in Manchester, UK.

The blast took place last night as concertgoers began to file out of the building at the conclusion of the performance. The witness accounts and video captured of the chaos and carnage are terrifying. One witness described seeing “bodies, blood, and people’s belongings, scattered all about” as she ran out with the frightened and screaming crowds trying to exit the arena.

The concert was that of American pop star Ariana Grande, who was popular among younger audiences. Sadly, children were among the dead, some as young as 8-years-old, and many frightened Manchester parents are still trying to locate their children.

Machester police immediately treated the explosion as a terrorist attack, and it has since been confirmed that it was a suicide bombing. The Islamic State has claimed responsibility, and police have identified 22-year-old Salman Abedi as the bomber, a “soldier of the caliphate” by ISIS’ standards, who made a statement of praise on the bombing earlier today. Not much is known about him at this time, although one European Intelligence official has said it is believed he was a British national of Lybian descent.

Sadly, it seems that this kind of terrorism is becoming the new normal. A few years ago, an attack of this magnitude would be shocking in the West, but they are happening more and more frequently. How people should react and what governments should do will differ from person to person, but as survivalists, we need to face the fact that terrorism is becoming one of the most important scenarios to prepare for.

You need to train yourself for situations like this, as well as a large-scale disaster or global crisis. Situational awareness, a smart EDC, and personal defense skills are just as vital as being able to identify edible plants in the wild or start a fire. Threats to our safety are all around us, and there are people out there who’s goal it is to disrupt our day-to-day lives rather than start a full-out war.

But one day, this level of violence might turn into a full-out war, so we need to think about preparing for that as well. In the meantime, our thoughts and prayers are with the victims of this monstrous attack. Stay safe out there, folks.