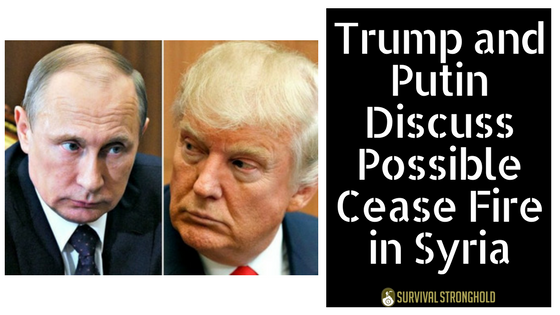 In their first conversation since the recent airstrikes in Syria, Russian President Vladimir Putin and US President Donald Trump discussed a possible cease-fire agreement in the war-torn country of Syria.

President Trump rocked the international community three weeks ago by authorizing a surprise airstrike on an airfield in Syria, after a horrific chemical attack took place in one of the rebel-held regions of the country. Syrian President Bashir Al-Assad was blamed for the attack, and so Washington decided to strike back.

Many of Trump’s supporters and enemies were concerned that this would send a bad message to Russia, as Russia has been supporting the Syrian regime with military presence since 2015.

On Tuesday, the two Presidents spoke on the phone, both expressing interest in ending the humanitarian crisis in Syria and arranging a cease-fire. They also spoke of meeting in person in July at the Group of 20 Summit to discuss the issue further.

The White House, in a readout of the call, said “President Trump and President Putin agreed that the suffering in Syria has gone on for far too long and that all parties must do all they can to end the violence,”

The Trump Administration also reported they would be sending a representative to the peace talks beginning in Kazakhstan on Wednesday, and that the two presidents had discussed establishing safe zones in Syria.

Ahead of the talks, Putin had stated that peace would be impossible in the region without the US, and afterwards, his representatives shared that the talk had been “businesslike and productive.”

Is this good news for our WWIII watch? Hopefully. But this isn’t a sure guarantee fighting will end in Syria anytime soon. It’s encouraging to see civil relations between the US and Russia, but negotiating the terms of ending such a bloody conflict can take years.

Either way, don’t let your guard down!

How to Use Parts of a Broken Phone for Survival (Infographic)

Survival News: Growing Conflict Between Turkey and the...