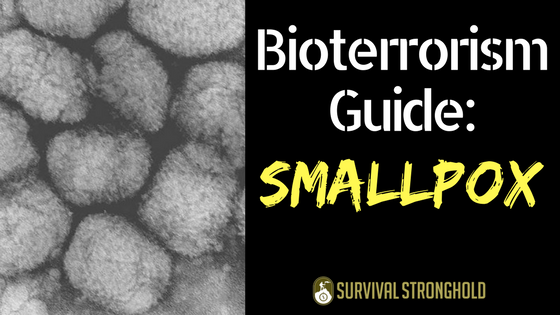 We are continuing on with our series on bioterrorism today, discussing the threat of smallpox.

It has long been suspected that smallpox, a mostly eradicated disease in the West, could be used by terrorists. Of all the biological agents that could be used as weapons, it is considered that anthrax and smallpox would be the most dangerous.

Smallpox has not been present in the US for over 60 years, and the last known case globally was in the 1970’s. However, the government, as well as other Western governments, have still prepared for a large-scale smallpox attack by vaccinating aid workers and stockpiling vaccines.

There is no cure for smallpox, only a vaccine, which is one reason it is a likely choice for bioterrorism. It can also be grown relatively easily in a lab, and are well-suited for aerosol dissemination. It could survive for up to 24 hours in the air, and potentially contaminate many people in that time.

If smallpox were to be released, it would be virtually undetected by whoever was exposed to it, until days or even possibly weeks later. The whole world would virtually be at risk, as well, since smallpox vaccination has largely ceased.

Many governments in the West have tried to be prepared by keeping vaccinations on hand, however, most experts agree the globe is largely at risk.

Smallpox gets its name from the spotted rash that typically accompanies the disease. Variola major, the most common type of smallpox, has an incubation period of 12 to 14 days. After this period, initial flu-like symptoms will begin to appear. A few days later, the rash appears.

While recovery is possible, there is no known cure, and once, smallpox left many blind, disabled, or even dead. A large outbreak on an unsuspecting and ill-prepared population would be devastating.

Survival Preparedness Boils Down to This…

5 Creative Ways to Signal for Help