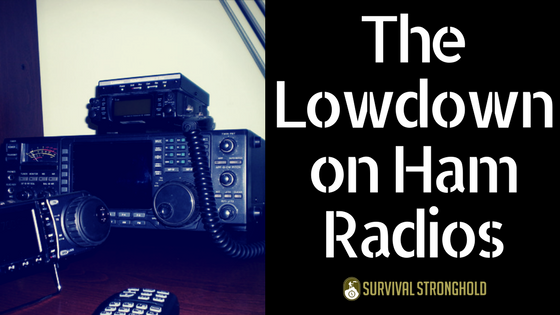 Ham radios might seem like a relic of the past to you, but if you’re preparing for disaster, you might want to consider looking into getting yourself set up with a Ham radio system.

Ham radios, also called Amateur Radio Service, is a 2-way radio system between yourself and other operators of ham radios. It is not the only system for 2-way radios, but ham radios are considered to be the best for emergencies, due to its long range and multiple channels.

They used to be far more popular, before the advent of so many means of constant communication, such as the internet and smart phones. But of course, in a disaster, it is most likely that these systems will fail, while ham radio would still be operable.

If you are concerned about staying in touch with what is happening in your region or even the country, being able to communicate with family members or others when cell phones and the internet fails,

The big downside of ham radio is that while you don’t need any special kind of certification to purchase a ham radio system, you do need a license to operate it. Absurd, yes, but bear in mind, if there’s an emergency, it is unlikely that this will be enforced. Now, we are not lawyers and this is not legal advice, so it’s up to you to decide if you want to operate one without a license or not in an emergency.

In recent memory, ham radios have proven very useful in the midst of mass, chaotic disasters such as 9/11 and Hurricane Katrina, to keep people informed on what was happening when other communication systems were down. The major disaster relief agencies all have channels in which you can tune in to and keep updated on vital information. Here are some of them:

Again, at the end of the day it’s up to you as to whether or not you want to get a ham radio system and operate it without a license, but if you do, it might be well worth your effort one day.

All Your Gear Won’t Protect You From This…

10 Items for Every Survival Pack