Why Combat Ranges are Not Just for Gun Nuts 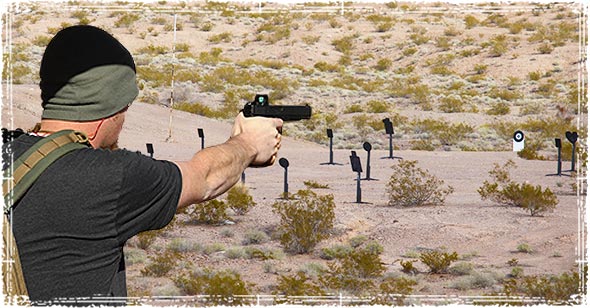 Many people who have chosen to carry a firearm for self-defense only go to a standard pistol range.  They stand in their lane and they fire one round at a time, one magazine at a time, and then bring their target back for inspection.  This is not without its benefits, but it is one-dimensional training.  If you have a combat range near you I would urge you to go there at least a few times to get a feel for a more realistic course of fire that resembles what you will need to do in a defensive shooting.  Here are some of the things you are missing if you are only going to a standard range.

Most ranges to not allow shooters to have their pistol holstered in concealment on the line.  This is for safety reasons.  But if this is the only experience you have shooting then you don’t have the practice necessary to comfortably draw from concealment and put rounds on target fast.

If you are shooting at a range with lanes, then you are shooting at only one target.  If the range is empty you might get a chance to shoot at two or even three, but they are going to be pretty close together and not require much change in position on your part.  Having to shoot, then look for other threats and firing on them if you see any is a big difference from just shooting the target in front of you.

It’s good to train in a solid stance with both hands on your firearm for control, but that might not be possible in a defensive shooting.  You might be on your knees behind your car leaning to one side and firing under your vehicle.  If you have never trained anything but one position it will be difficult to put rounds on target in a high-stress situation when you are in an uncomfortable position.

You are probably going to find a few gun nuts at a combat range, but that doesn’t mean that there aren’t benefits to be had from changing up your training style.  You don’t have to start wearing 511 pants to learn to protect yourself.

An Ancient Secret to Slimmer Waists…

Learn to be a Master Carpenter at Home...

Why You Should Always Have Activated Charcoal

Tips for Choosing the Right Bug Out Bag

DIY Survival Weapons When You Don’t Have a...