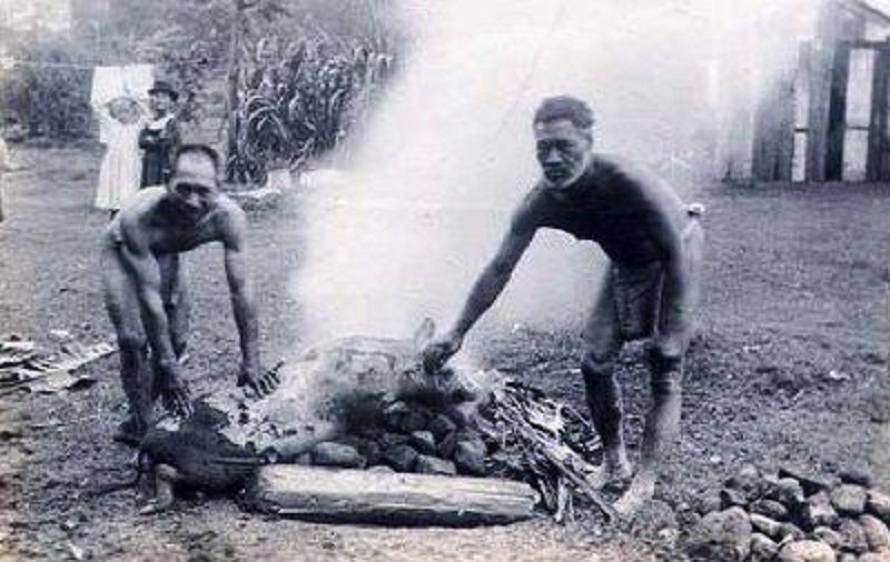 Some forms of technology will never be fully obsolete. These three primitive cooking methods are still great options for low-tech cooking. But what distinguishes these three methods of cooking is they can be done out in the wild, using nothing more than sticks, leaves, rocks and fire.

Traditional in Hawaii and elsewhere in the South Pacific, pit cooking is ridiculously low-tech and makes for an incredible flavor. You probably recognize the Hawaiian  name for this method: “Kalua”, as in, kalua pork. A large pit, just big enough to fit the animal and accompanying vegetables-sweet potatoes or breadfruit in the case of the Polynesians, root vegetables for Europe or North America-is dug in the ground. First, a fire is kindled using small twigs and leaves, the larger pieces of wood-preferably aromatic-are placed on top, followed by a base of rocks. River rocks tend to contain moisture and will explode hence should be avoided. The meat and vegetables are placed on top and covered. This will then cook for hours, and as the fire dies and become coals the pit becomes like a smoker or steam oven.

Probably the most recognizable of these methods, spit cooking is relatively self-explanatory: the game is skewed on a spit and placed over a fire. Metallurgy obviously made this method much easier, as sturdy iron spits were constructed that could be easily turned over the fire, rotisserie style, but it is still effective with sticks. The stick selected for the spit is sturdy, thick enough to support the weight of the animal, and preferably able to be turned easily. Smaller sticks, pieces of metal or string are then used to fasten the animal to the spit. Next it is suspended over a steady fire on a pair of sticks that have been carefully selected and staked in the ground. The fire of coals is kept steadily burning as the meat slowly cooks, being turned as needed.

Like the stones used in pit cooking, stone cooking is instead done over an open fire and is essentially a very primal griddle. Stone cooking has been enjoying a bit of popularity recently among the paleo/primal diet crowd, but it’s nothing new. It is as simple as can be: a large rock, crack-free and with a flat top, is placed over an open fire. The stone is allowed to heat up the meat or other food placed right on top to cook.

These cooking methods are great to master for anyone. By either lightening your backpacking load or preparing you for SHTF, primitive cooking is an invaluable skill for survival.

Make Your Own Survival Food, The Traditional Way

Click Here To Get The Best Survival Medical Training…

Defense from a Stick or Bat Attack (Video)...

Why You Should Always Have Loperamide in Your...