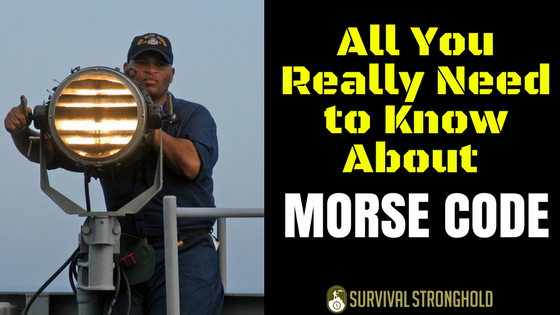 Morse code is one of the oldest forms of modern communication. The set of “dits” and “das” that correspond with the American alphabet were used before the telephone, and certainly long before email and text messages, to communicate messages across the country and eventually the world.

While it has long been demoted by many different forms of more modern communication, it still remains as a vital communcation skill that every survivalist should have a handle on.

Does this mean you need to get out there and memorize how to speedily send long, descriptive messages in morse code right away? Not necessarily, although it will certainly be useful in a disaster if you do.

There is only one simple message you vitally need to know in morse code, as a matter of survival and prudence: SOS.

The SOS signal is very easy to do, and there are an infinite number of situations in your life in which you might need to use it. This is how to do SOS:

Three short taps, followed by three longer taps, and then three short ones again. That’s it. Here’s a visual aid for how this “looks” in morse code: This is a universal sign of distress, and the majority of people will recognize what it means. There are a great many number of disasters in which regular communication grids will be down, but morse code can be transmitted in an otherwise static background, making it the most likely form of communication to function when others fail.

Of course, if you’d like to take the time to learn the whole of morse code, it certainly won’t hurt, but you do have to bear in mind that people have to understand morse code in order to receive messages in it. For the most part, however, at least among older generations and certainly among rescue workers or government officials, the “SOS” is widely recognized, so it will always help you out to know. Edible Plants You Can Forage (Infographic)

Stung By A Bullet Ant

3 Survival Hacks for When Tools Are Not...