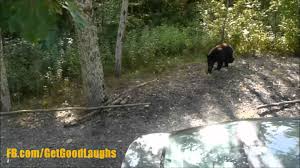 In the first video, you see a man that is bold enough to attempt a home invasion in broad daylight run for the hills when a 8 pound Yorkie confronts him.  Whether he has a phobia of small dogs, or whether he knew that the homeowners and neighbors were now altered to his presence from the dog’s barking, the result is the same, he ran and the homeowners are safe.

The second video shows what looks like a 200 pound plus black bear run, not once, but twice, from what also looks like a tiny Yorkie.  The videos are comical, but they serve as a lesson as well, you don’t need a 90 pound, attack trained, Pitbull for security.  If you can’t have a dog that size, for whatever reason, that doesn’t mean that you can’t enjoy an increased level of personal safety, not to mention the companionship of a dog.