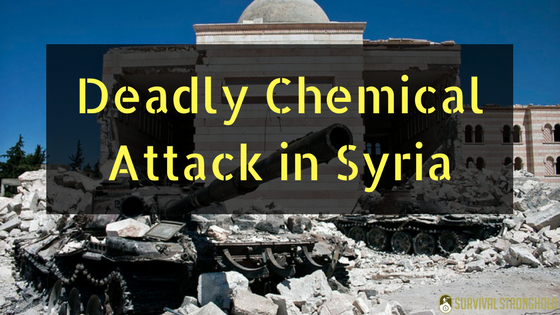 Reports have been flooding in from Syria over the last few days that a deadly chemical attack on civilians has taken place.

The northern, rebel-held area where the attack took place was turned into a deadly kill zone, and aid workers reported ghastly scenes of sick and dying women and children.

58 people have been killed, including 11 children, and Western leaders, including US President Donald Trump, blame the Syrian government of President Bashar al-Assad, and have called upon Syria’s allies and supporters, Russia and Iran, to prevent another attack of this scale from taking place.

Chemical warfare has been a concern in Syria throughout the last six years of bloody Civil War, but this is by far the worst attack to date, and the first in several years. It is suspected that the deadly gasses contained certain nerve agents that are banned by international law.

As we watch the major world superpowers in recent months for the potential makings of WWIII, Syria is often at the center of mounting tension between the US and Russia. The war in Syria was often referred to as a proxy war between the US and Russia when President Obama was still in office, and despite the constant accusations of collusion with the Russians made against the Trump administration, he sent a clear message to the world that the US still stands in opposition to the actions of the Assad regime in Syria, which Russia has continued to support.

At the end of the day however, beyond the noise and drama of politics, observing what has happened to the country of Syria is simply devastating, and stands as a stark reminder of reality to preppers everywhere. You never know when this kind of upheaval and war might come to your own country, so never stop preparing for the worst.

Know the Dangerous Animals in Your Area