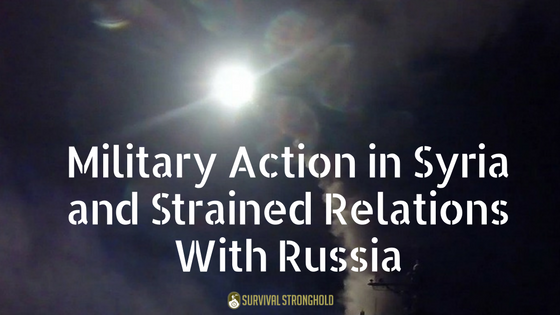 You’ve probably heard by now that on Thursday night, President Trump ordered 59 cruise missiles to be launched on an airbase in Syria.

In a press conference following the event, he explained that this was in retaliation a chemical attack that happened earlier this week in a northern, rebel-held region of Syria, which, despite denial by the Assad regime, was blamed on the Syrian military.

Instantly, Trump’s largely enthusiastic base was split. He appeared to do a complete turnaround from the isolationist rhetoric of his campaign, and many of his most outspoken supporters openly criticized this move.

The biggest concern with this move is that the Russian government, who has been supporting the Assad regime throughout the last five years of bloody civil war in the region, would be antagonized. Friday morning Putin did denounce the attacks, saying this put a serious strain on US-Russian relations.

In the wake of the blasts, many major US allies came out in support of the move, while Iran and Russia openly denounced it, and many fear this will lead to a much larger conflict between the US and Russia.

Shortly following the missile deployment, two Russian warships positioned themselves in between the Syrian coast and the US destroyers that had deployed the missiles, and Russian officials have continued to express dissatisfaction with this decision to intervene in Syria.

This won’t necessarily inevitably lead to WW3, but there is very good reason to be concerned. As always we want to encourage you to get your family prepared, and your affairs in order. It’s always prudent to prepare yourself for short-term disaster, but now more than ever it is important to get prepared for the long-term as well.

The news can be depressing to follow daily, but it’s important to know what’s going on in the world. Even behind the big headlines like this one, there are smaller shifts happening that can indicate major change or conflict is coming, so keep yourself informed.

10 Foods You Should Be Growing Yourself (Infographic)