Survival News: Growing Conflict Between Turkey and the Netherlands 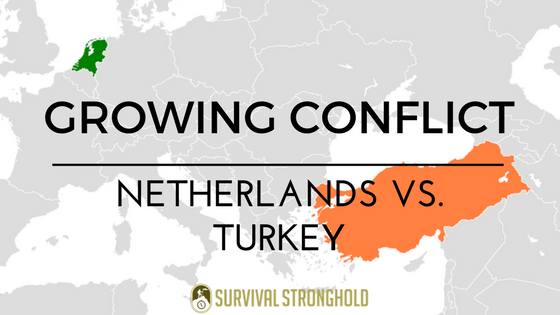 A conflict between Turkey and the Netherlands that began last week has been growing as Dutch officials warn their citizens against travel to Turkey Monday.

Turkish President Recep Tayyip Erdogan publicly vowed there would be retaliation, saying: “Nazism is still widespread in the West”, and Turkish newspapers began bashing the European country, calling the Dutch “the dogs of Europe”.

Dutch and other European officials shot back, as was the case with the Dutch deputy prime minister, Lodewijk Asscher, who stated that “to be called Nazis by a regime which is walking backward in regards to human rights is just disgusting”. German Chancellor Angela Merkel, usually the first European to publicly support any kind of “multiculturalism”, publicly rejected the comments as unacceptable and offered the Netherlands her “full support and solidarity”.

What is particularly tense about this public spat is that the two countries are NATO allies, so for the Netherlands to bar entry to a Turkish official is seen as unorthodox and hostile. But with rising crime rates, widespread violence and riots, and taxed police forces, one can also hardly blame the Dutch government for wanting to prevent the rallies. It is unclear if the violent crowds were pro- or anti-Erdogan, and it is reasonable to assume that both groups were present, as the referendum the Turkish minister was campaigning for, Referendum 16, would expand President Erdogan’s powers.

It is unclear if the violent crowds were pro- or anti-Erdogan, and it is reasonable to assume that both groups were present, as the referendum the Turkish minister was campaigning for, Referendum 16, would expand President Erdogan’s powers.

This much tension between NATO allies certainly comes at an interesting time, as Sweden reinstates conscription and most European countries are faced with a crippling migrant crisis. The right and left wings of the populace in these countries are butting heads just as much as here in the US, as right-wing leaders grow in popularity and vow to undo the damage done by years of multicultural policies.

In our WWIII watch, this certainly is an interesting development. We’ll keep an eye on it.