Survival News: Is the US Instigating War With China? 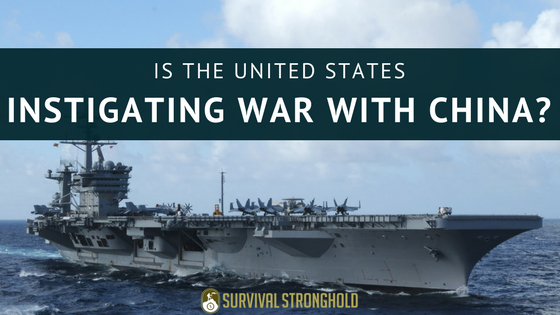 The United States has deployed the aircraft USS Carl Vinson into the South China seas, reportedly for “routine operations”, but many worry it might be setting the stage for instigating conflict with China.

The US and China have had increased tension over trade and territory in recent years, new Secretary of State Rex Tillerson has publicly stated that he thinks access the islands China has built or occupied in disputed territory.

The Trump administration seems to have positioned itself for a more confrontational stance towards China, so the deployment of an aircraft carrier into disputed territory is definitely cause for many to be nervous of confrontation.

War with China would be no small conflict, and as many politicians in the United States continue to accuse Russia of spying and involvement with our US elections and current administration, we would not want to provoke either of the two massive global powers, who happen to also be allies. Although the Trump administration is constantly accused of being far too friendly with Russia, to the point of treason, it certainly creates a very interesting dynamic between the three largest military powers on the globe.

If you’re not preparing for WWIII already, it’s definitely time to start thinking about the kind of supplies you will need for global war. Think about both securing your home as well as preparing for relocation (if we’ve learned anything from the War in Syria, it’s that you just never know when your home might be leveled and you’ll get trapped in a global migrant crisis). While the US has pretty secure borders (immigration issues notwithstanding, we do have the military power to more securely defend our land borders from foreign enemy if needed), many of our trade routes and international businesses and supplies would be threatened were there to be another World War, regardless of who the players and allies would be.

God quite literally only knows what will happen with our new administration and the worrisome flexing of global military might, but as always, it’s always best to prepare for the worst.