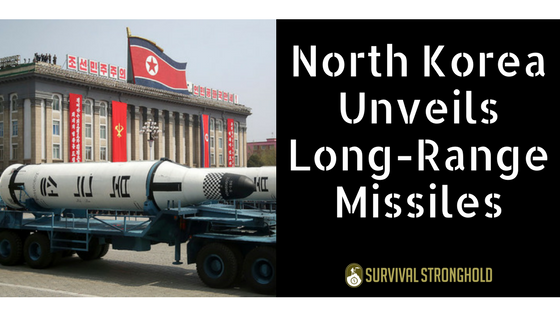 Amid rising tension between the US and North Korea, the rogue communist nation celebrated the birthday of its founder, Kim Il Sung, with a full regalia military parade.

Featured in this parade was the unveiling of what were apparently new missiles that North Korea clearly wanted the world to see. It is unclear whether or not the missiles are in fact as technologically advanced as the North Korean Central News Agency claims they are, but if they were, it would mean the small yet aggressive Asian nation has more advanced missiles than the West had thought.

This comes in the wake of the US’s efforts to ramp up a complex missile defense system in South Korea, as a response to North Korea’s continued missile tests and testing the limits of international nuclear sanctions.

Donald Trump has responded to the actions of Kim Jong Un, the grandson of Kim Sung Il and current leader of the PRNK, with ambiguous language. While he continues to claim he is committed to preventing North Korea from overstepping their bounds, he has also been unclear as to whether or not the US will respond with aggression.

North Korean officials, however, have made clear that the US’s actions in South Korea have “created a war situation”.

While the small Republic could easily be wiped off the face of the earth by the massive military might of the United States, they also have our ally, South Korea, in a precarious position. It is well-known that they have enough ballistic missiles aimed at Seoul, Korea, to cause significant civilian causalities, so despite the relatively large advantage we have over them, we still have to play our cards right.

I don’t know about you, but I feel like we’ve been doing this dance with North Korea for decades. While it might seem familiar, however, you never know when the other shoe will drop. It’s always important to stay on the alert, and get yourself prepared for the worst.

Survival News: Is the US Instigating War With...