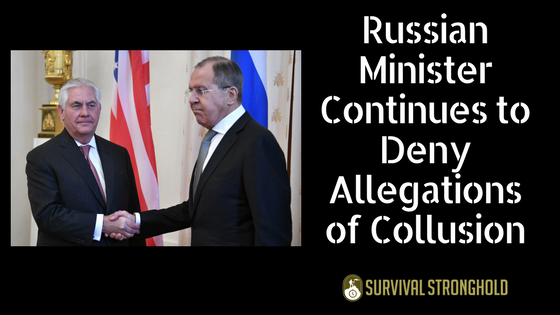 In a press conference following a meeting between Russian Foreign Minister Sergei Lavrov and US Secretary of State Rex Tillerson Tuesday, Lavrov maintained that there is no evidence to indicate there was any interference on the part of the Russian government in to the 2016 election.

Appearing irritated at the constant stream of questions regarding the allegations, he said through a translator that “I never thought I’d have to answer such questions, particularly in the United States given your highly developed democratic system.”

US-Russian relations are worse than they have been in years, both Tillerson and Lavrov have said. While the possibility of Russian collusion in the election was not discussed at their meeting, both men expressed their desire to improve relations and underscored the importance thereof.

However, this is framed by just how poor US-Russian relations have gotten over the last few years. Speaking of Obama, Lavrov said, “Unfortunately, the previous administration bent over backward to undermine the solid foundation of our relations. We have to start from a very low level.”

This is the third meeting between Lavrov and Tillerson, and Tillerson expressed gratitude to Lavrov for his willingness to meet and smooth things over. Lavrov, in turn, praised the Trump administration for their “businesslike” approach to mending the relationship between the two world superpowers.

This meeting comes amid the explosive news that President Trump fired highly controversial FBI director James Comey a mere two days after Comey had testified to the Senate Judiciary Committee’s hearings on the possibility of ties between the Trump administration and the Russian government. The mainstream media, that had called for Comey’s resignation a few months ago after his bombshell letter to Congress regarding the re-opening of the investigation of Hillary Clinton shortly before the election, now considers Trumps’ decision to fire Comey to be highly suspicious.

The mainstream media, that had called for Comey’s resignation a few months ago after his bombshell letter to Congress regarding the re-opening of the investigation of Hillary Clinton shortly before the election, now considers Trumps’ decision to fire Comey to be highly suspicious. And while they were quite eager to drill the Foreign Minister regarding both Comey and the Russian spy allegations, he comically blew off questions regarding Comey’s firing, by sarcastically asking if he’d been fired.

It would certainly bode well for our international relations to mend our fences with Russia. Conflict with the Kremlin has been at the center of both our possible involvement in Syria and North Korea. If world war were to break out, it would surely be between the US and Russia, so for the most part, this seems like a good thing. But only time will tell.