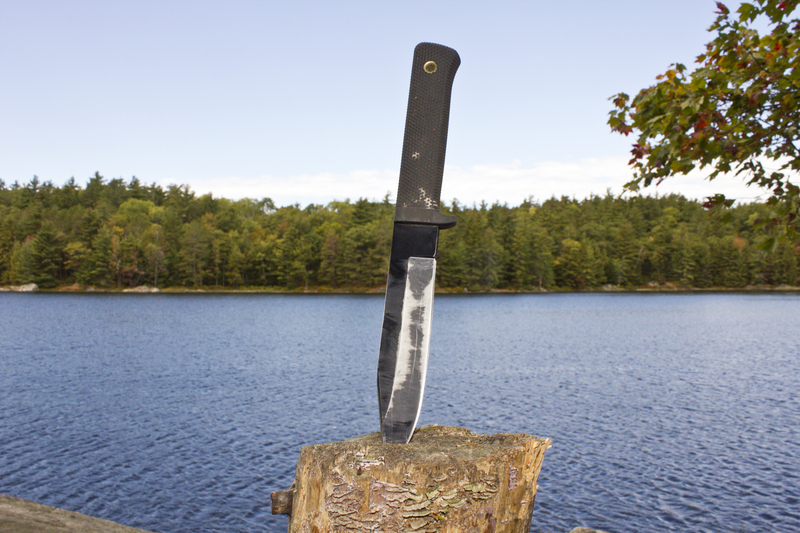 When it comes to survival tools, few things are as good to have on hand like a knife. You can use a knife for many different things, from slicing open and preparing your prey to cutting rope. Here are nine very useful ways to use a knife when you’re out there, trying to survive.

1) It Doubles as a Hammer

Did you know that you can use the hilt of the knife as a makeshift hammer? As long as you put the blade back in the sheath so you don’t cut yourself, this end of the knife can be used to hammer in tent poles, stakes, and other things. If you don’t have a sheath for your knife, wrap it in heavy cloth. The goal here is to not cut yourself.

Speaking of stakes, a knife can quickly become one, if necessary. Plant the blade in the ground and tie your twine to the top and you’ll be able to connect lines to it. This is a good method of trapping, laying out your perimeters, or doing whatever else that you need the twine for.

4 Life and Death Reasons to Carry a Knife>>>

3) Cut Branches to Make a Shelter

This is one of the most obvious ways to use a knife. You can use it to cut branches in order to create a shelter. If you don’t have a tent or a nearby cave or outcropping, then you’ll have to make your own shelter. Use your knife in order to cut those branches down to size.

You’ll need firewood, and thankfully, there’s a lot of it out in the woods. It just needs to be cut down to size. If you don’t have an ax, then use your knife for this task instead.

The Most Disturbing Documentary of 2017>>>

5) As a Piece of First Aid Equipment

In a pinch, a knife can (carefully) be used to remove splinters from your skin. You can also cut bandages and gauze with it. If you don’t have any bandages, then use the knife to slice strip from a piece of clothing – not while you’re wearing those clothes, of course.

Tinder is useful when you’re trying to start a fire. You can create your own out of some deadwood. Cut the wood down to size and then slice off the bark. It should be dry enough to help your fire catch. If you can, cut plenty of small pieces, just in case you need to start another fire.

4 Ways to Start of Fire You Never Thought of>>>

While you shouldn’t attempt to pry up rocks (or anything like them) from the ground with a knife, you can use this device as a shovel if necessary. Yes, it will dull the blade and you have to be careful to not cut yourself, but this really does work well.

One of the best things about a good hunting knife is the fact that you can use it to start a fire. As long as you have a ferrocerium rod and a knife, you’re good to go. Just hit the rod with the knife at just the right angle and plenty of sparks will fly.

If there’s a tool that you need, such as a spear, then you can use your knife to make them. Just cut away the bark and begin to fashion one end into a point. Just remember to not fasten the knife to the end of the stick, as you’ll more than likely end up losing it this way. You can use the pointed stick to spear fish.

Let Us Know What You Think...
9 Unique Ways a Knife can be Used for Survival was last modified: February 5th, 2019 by Nick A

How and When to Use Compression Elastic Bandages?

Prepping for a Gun Ban?

Protecting Yourself During Civil Unrest