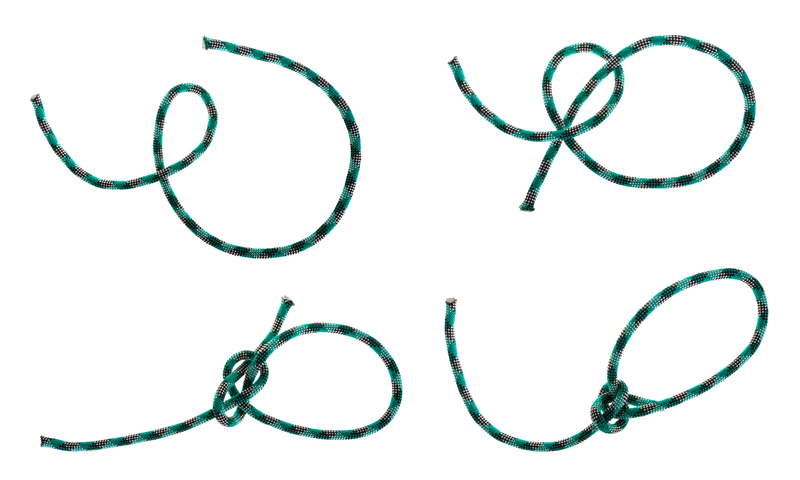 The Bowline Knot is probably one of the most helpful knots you will ever learn to tie. The name Bowline originates from the terminology “bow line” and used to secure the line of a square sail that holds the weather leech forward to prohibit it from being blown back.

It forms a very secure loop that doesn’t jam but is easy to tie and untie. Most often used to create a loop of any size at the end of a line, this knot has been used for centuries. Reliable, stable and strong, it retains up to 60% of the strength of the line it has been tied with.

NOTE:  since it can be untied easily, don’t use it in a life or death scenario such as tying off a heavy load to keep it out of harm’s way, or going climbing, anywhere.

Remembering the way to tie a Bowline can be made easier by learning the phrase “The rabbit comes out of the hole, around the tree, and back into the hole.” When and How to Use It

The Bowline has many uses that include fastening mooring lines when they won’t have to be released under a load and joining two ropes together.

Under load, it does not bind or slip except under very extreme force.  If no load force is present, it can be easily untied. This attribute, however, also allows it to shake itself loose if not loaded.

Some tasks this knot can be used for include: Alternatives to the Traditional Bowline Knot

The Eskimo bowline is one alternative method of this knot.  In this method, the knot is tied around a section of the loop itself instead of the standing end.

This particular method is often favored if the loop is going to be stretched open.  It’s also shone itself to be more resistant to shaking loose on its own.

This method comes in handy if you are injured or need to keep your other hand on the object you are trying to tie up.

Essentially, the left-handed bowline is a mirror image of the traditional knot.  The end is threaded the opposite direction around the standing end.

Suggested Article: How to Tie an Adjustable Knot

The bowline knot has rightfully earned the nickname the “King of Knots.”  If you are interested in adding some helpful knots to your set of skills, this is the one to start with.  Especially if it also happens to be the only one you get around to learning.

The bowline knot’s dependability and versatility make it a good addition to anyone’s mental library.

Let Us Know What You Think...
Bowline: The Most Important Knot Everyone Needs to Know was last modified: February 23rd, 2018 by Nick A

6 Survival Benefits of a Generator

Getting Drinking Water from Vines